The MFLL airborne system has been designed to be reconfigurable for multiple airborne platforms.  Flights have been conducted on a Goodyear airship, Learjet 25, NASA UC-12, NASA DC-8, and most recently a NASA C-130.  The system transmits laser light through a window in the bottom of the aircraft and collects the backscattered/reflected light through the same window using a custom telescope. 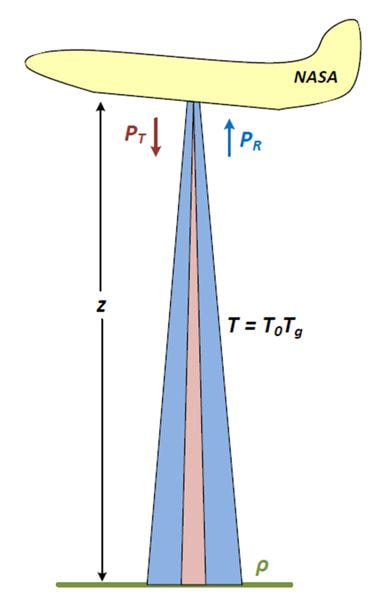 The concept behind IPDA measurements is to transmit a pair of wavelengths with one being highly absorbed by the gas of interest and the other being minimally absorbed.  Using wavelengths that are very close (a few tens of picometers) results in the two wavelengths having very similar extinction and scattering profiles with the primary difference being the absorption from the gas of interest.  Therefore, a ratio of the relative intensities of the two wavelengths can be used to evaluate the total absorption between the aircraft and the ground, which in turn can be used with other information about the absorption cross-section and the atmospheric state (temperature, pressure, and water vapor) to calculate a concentration of the gas as a dry air mole fraction.

Through the selection of appropriate modulation of the individual signals (each wavelength) one can also retrieve the range to the surface by measuring the phase shift of the modulated waveform.  This approach is used for both the IPDA and as a means to do ranging to the surface.

There are several aspects which make monitoring range or concentration quite challenging from an aircraft.  Examples include large signal changes with altitude, large temperature and pressure variations, and compensating for changing aircraft attitude.  S3 has demonstrated the ability to design and deploy systems in this harsh environment with highly robust results.